When you want a choice of non-alcoholic drinks it can be hard to find something that tastes like a treat whilst not being too sweet. A long time ago I tried two alcohol free beers, they were both horrible, hence I’ve never been tempted to try any since. That is until last month when I picked up a bottle of Brewdog ‘Nanny State’ beer to read the label, I assumed it was another in the Brewdog range of craft beers. It was only then that I realised it was alcohol free. Well the name should have been a clue! Certainly an inspired name choice which made me smile as soon as I realised my mistake.

Still not convinced that it could be worth buying, I had skirted around it on the beer aisles for a few weeks, but then 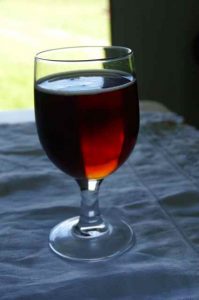 determined to be openminded decided to try one. Well it proved to be third time lucky. I was peasantry surprised, the smell was invitingly of ‘proper beer‘ and the taste was certainly craft beery. A nice hoppy bitterness, with none of the yukky flat after-taste I remember.  Since trying Brewdog’s Nanny State I was told about this excellent website – and yes of course Nanny State is on their non-alcoholic drinks list. Such a good idea, The people at Dry Drinker do all the hard work of sourcing for you and only sell what they have actually tried.

There is definitely a need for some more sophisticated non-alcoholic drinks. I was heartened last summer to read an article by Victoria Moore about a new family of non alcoholic drinks, which sound very grown up. More along the lines of non-alcoholic G & T’s, they sound tempting. At the moment finding them seems to be the hardest part, hence so far no luck. Before buying a bottle it would be nice to try a glass to see if we really like it or perhaps which one we would prefer. They don’t seem to be on offer in pubs. but I will keep looking out for them.

Meanwhile this month the hops also had their thirst quenched! Finally it rained, at last they had the good soaking they badly needed, it was getting pretty dire especially for the young ones.  The combination of the dry soil and cold night temperatures including a frost in April had put the brake on their normal rapid Spring growth. However, now that’s all changed, the hops will soon be rapidly climbing the strings.